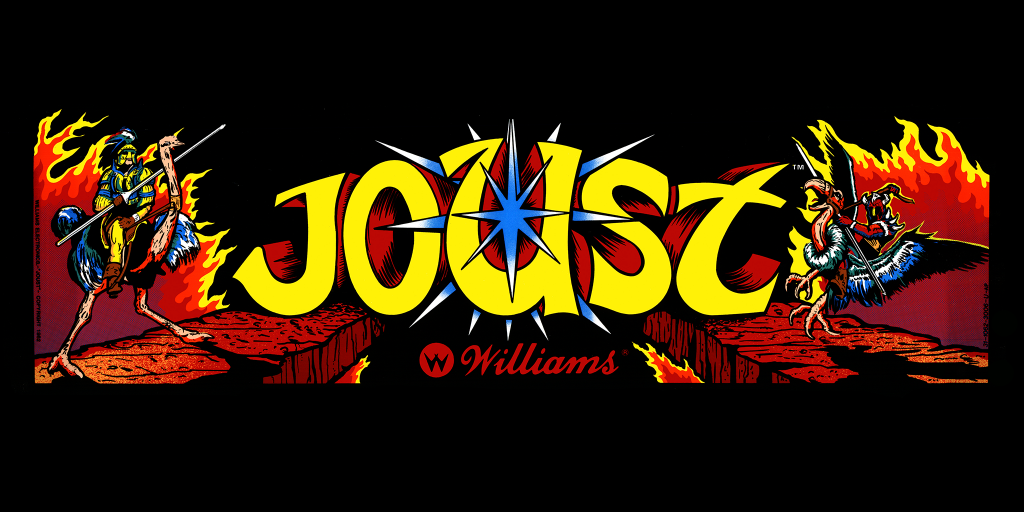 Recently, I mentioned that "Ready, Player One" talked about the 80s arcade game Joust, which sent me off to install a copy of MAME and see if I could play it.

For anyone who also has an attack of nostalgia and wants to play these games, I thought I'd quickly talk about how I got things setup. I've used MAME previously, but in case you haven't, each arcade machine comes in the form of a ROM. A ROM consists of binary dumps from the machine, zipped together. A number of games that run on the same hardware share these dumps, so they get bundled as parent ROMs.

I'll give my warning now. If it isn't obvious from the description, the downloading and possession of ROMs for emulators like MAME is of questionable legality. Some of the games are still in copyright and so the companies that own these rights will treat it like the piracy of any software.

Software piracy is something I stopped doing a long time ago (around the same time I could afford to buy it!) and hunting around for the right ROMs plunged me back to some of my misspent youth, scouring forums for cracks and serial keys. Not the most productive use of time! I downloaded a couple of ROM files from sites, but I think they weren't for my version of MAME and it gave me a generic message that files were missing.

After some digging around, I discovered that you could get a complete set of ROMs for MAME using a torrent from a site called Pleasuredome. This site really made me feel I was about 13. Luckily only because of its aesthetic and not, given its name, the content I worried about finding there. But true to word there are torrents for sets of ROMs covering the most recent versions of MAME. I'm not advocating any of this, and I'm not saying I downloaded the ROMs from this torrent, but I now have a working copy of Joust to play.

Another option if you don't want to muck about like this, is to play it online. You'll need Flash but one site that offers this and other games is 80s Arcade.

Anyway, enough about pirating arcade games. What's Joust like? In a word, weird. But it's brilliant! If you're developing casual games then you could do a lot worse than to take inspiration from games like Joust.

You're flying around on an ostrich(?!) with a lance. There's three controls, left, right and flap! Like Flappy Bird, you have to keep flapping to stay in the air or build momentum. There's a rudimentary physics system at play, so you can't stop dead immediately, or fly in the other direction if you've got any speed. The game arena is a single screen and if something flies off one edge it appears on the other. The object is to make contact with enemies (people on other birds flying around the screen) while you are higher up than them. This unseats the rider and spawns an egg that you can pick up for bonus points.

That's it! There's some pterodactyls and something called Shadow Lords, that I embarrassingly haven't seen yet due to my total lack of ability playing the game. It's fantastically addictive mainly because of the frustrating nature of the physics. This strategy guide presses the point that you shouldn't try and fight the game's physics, and it's good advice. Newbies like me can end up flying around Asteroids style and careering in to enemies with blind hope that you'll come off better from the contact.

There's a lot to explore with this simple game. I'm definitely going to play it some more and make some notes about the aspects of the game play I enjoy. Despite being addictive, I can put it down, so it makes for a good game to play in a five minute break - if I last that long!

As well as hopefully giving me ideas for the game I want to write, this experience has made me want to take on my own arcade cabinet build. Nothing full sized, but something more table top like that I can put away. I've got a number of single board computers like the C.H.I.P., Pine64 and Raspberry Pi. All of these would be capable of running a version of MAME, perhaps RetroPie. I've also got a 9" screen from supporting an old Kickstarter project. The kits for arcade sticks seem inexpensive, so the project will mainly involve me learning some woodworking skills. I currently have no skill in that area, so it should be fun trying, or amusing for others as I saw off my index finger.

How about you? Did you play Joust? Or are you a master from the 80s? A lot of the appeal of Joust was the two player mode. I'd like to play this but don't have anyone as sad as me in the vicinity so I might explore the options for network multiplayer games using MAME. Let me know if you fancy teaming up!