Casting an Ear Over Science and Stories 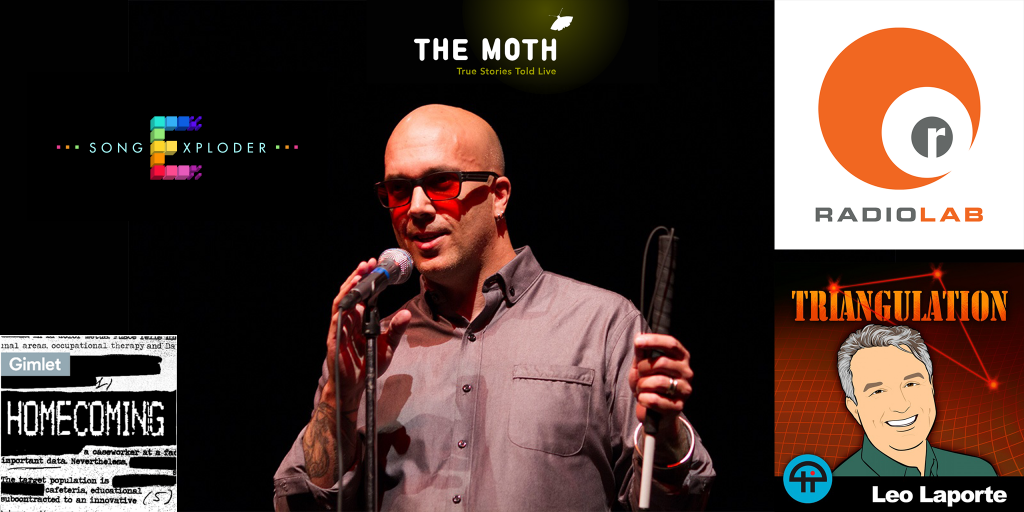 The writing challenge for today? A listicle! I thought I'd steer clear of giving it a title like 'Top 5 Podcasts for 2017'. Not so good for SEO, but feels a bit less dirty.

I listen to a lot of podcasts, so it seemed like the right topic for a list. If you're also a podcast fan there's going to be nothing surprising in here, but this is a list of some of the podcasts I get excited about when a new episode gets released and appears on my phone.

The first podcast I ever listened to. It was while I was waiting for my wife (girlfriend at the time) to have a somewhat serious operation on her ear! The topic of the episode was 'Falling' and Radiolab's style of soundscapes and effects really transported me away from the hospital waiting room. It also introduced me to the word 'defenestration', which sealed the deal and had me listening to all the previous episodes I could find. If, for some reason, you haven't come across it before, I encourage you to listen to an episode now. You won't regret it!

I think The Moth was the second podcast I subscribed to, but if not it was definitely one of the first. For those that don't know The Moth is a story telling event in the style of a poetry slam, or open mic night. People get up and tell a story on a topic with no notes for a maximum of 15 minutes. Some selected audience members then vote on the best ones. You never know exactly what you're going to get, but some have you in tears or laughing out loud. They run the events in London now, but I've been to a couple in America. The first time was on the last night of our honeymoon, and it was the perfect event to finish on. A related storytelling podcast is the Story Collider, which is a similar format but specialises in stories about science.

Radio plays in recent times (at least in the UK) have not been great. Things like the Hitchhikers Guide to the Galaxy would now go straight to TV along with any other good science fiction concepts. The first drama based podcast I listened to was The Truth, but I've got more Radiotopia podcasts to talk about, so I thought I'd recommend this recent Gimlet podcast, Homecoming. If you haven't heard it, go and have a binge listen. You won't regret it! In fact, I don't think I'll tell you any more than that to prevent the chance of spoilers. If you like it, you might also want to listen to some other Gimlet podcasts. My favourites are Startup, Crimetown and Reply All. All different but the same brilliant production quality.

Radiotopia is a fantastic thing! I came across 99% Invisible some time ago before the Radiotopia podcast network existed. Similarly to Radiolab, I ended up binge listening to back episodes of 99% Invisible and becoming a bit of a fan boy - supporting Roman's Kickstarter campaigns and sporting the t-shirts I got as a result. Radiotopia has introduced me to lots of great new podcasts, but Song Exploder really stands out. The majority of the songs I don't know but after hearing the thought the artist has used to compose the track it often makes me head to Spotify to listen to it again, along with their other work.

You could do a lot worse than subscribing to all the Radiotopia podcasts but three of my favourites are (of course) 99% Invisible, Benjamen Walker's Theory of Everything, and Love and Radio.

One of my other reasons for listening to podcasts is to keep up to date on industry news. A bit like an audiobook equivalent of a newspaper or magazine. Triangulation would be like the cover story of that magazine for me. The interviewee is often plugging a new book or product, but that's a good thing! It's far from an hour long advert and often gets in to some great detail about their views on the tech industry and previous work.

Other great tech podcasts to listen to are, Shop Talk (web development podcast), The Matt Report (it's hard to find a good WordPress podcast, but this one has stuck for me), Full Stack Radio (I only recently came across this but it's got some good interviews, especially for PHP developers), and The Creative Coding Podcast (a good mixture of games development and techniques for art projects).

No, that's not the title of another podcast, it's a command to stop reading this and enjoy something in a different format. Maybe instead of watching TV tonight, put on some headphones or dust off the stereo and let a podcast feed your brain without the nasty sleep disrupting blue light of the screen.